Yes, it's been a while since I last put up a blog post -- suffice it to say, I've been very busy!  It's all good -- since I love what I do, I'm not complaining - however, my social media output has been mostly what I can do "on the run," which are short posts on Facebook -- but today I promised myself that I'm going to post about a very special wedding from a few months ago that truly epitomizes how special and amazing a customized wedding ceremony can be!

When Brooke and Frank first contacted me about officiating at their Disney wedding, we connected instantly -- they were looking for a wedding ceremony that included stories of their love for one another, and also included lots of "Disney Magic" elements, since they were both big on Disney.  My kind of people!  We had a lot of fun working on their ceremony -- but they are both very, very busy people -- and as their special day grew closer, there was a special element that was very important to Brooke that hadn't been completed yet -- she wanted a part of their ceremony to include wording that each of them had written about what they loved about the other.  She had completed her wording, but Frank had been very busy, and hadn't completed his.

Being considerate and thinking of Frank's feelings, Brooke understood that this was becoming stressful to him -- so she told me that we could leave this part of the ceremony out.  There were enough other wonderful elements that were already in their ceremony, and the most important thing to her was to have both of them relaxed and happy.  I could tell by her voice that she was disappointed, but was willing to compromise this part.  What a wonderful way to start a marriage -- because as anyone who has been married for a period of time can tell you, compromise and understanding is an essential element of a happy marriage!

A few days before the wedding, I got a phone call from Frank -- he realized how important it was to Brooke to have the part in the ceremony where they shared what they loved about one another -- and he had an idea!  He and Brooke had seen a sign in a gift shop that truly spoke to his feelings about Brooke -- and wanted to know if he could use that as a basis for what he loved about her. Of course, I said it could be used!  Here's what the sign says: 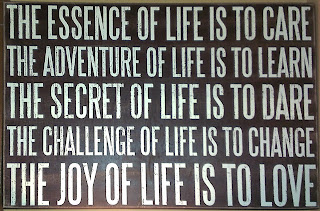 We spent a lot of time on the phone that afternoon as he told me details about each of these lines that explained his love for Brooke, and together we put together some wording that was just perfect!  And since Brooke had sent me the things she loved about Frank, in the hopes that they would be used, I had everything I needed to set up a wonderful surprise for her!

But wait, there's more -- as I spoke with Frank, I realized that there was a ceremony element that would add another surprise for Brooke, and include more Disney Magic -- the Major Domo making a surprise entrance with their wedding rings!  I suggested it to Frank, who had never heard of it, and his immediate response was "YES!"  Though it was only a few days until their wedding, he contacted Disney, and they worked their magic to add the Major Domo. 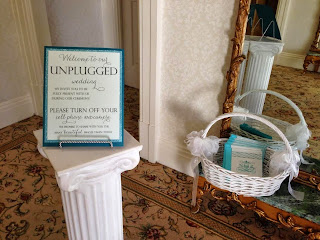 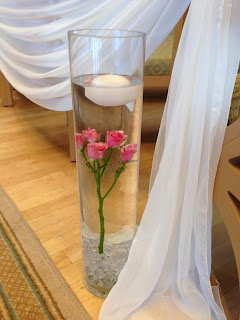 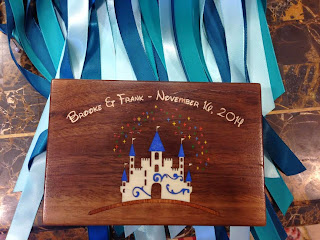 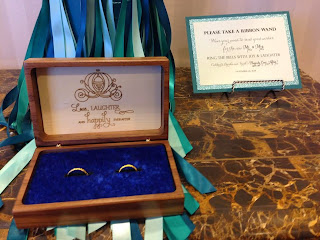 Brooke came down the aisle, beaming, Frank held out his hand to her, and they stood in front of me with radiant faces. 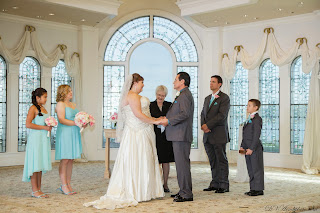 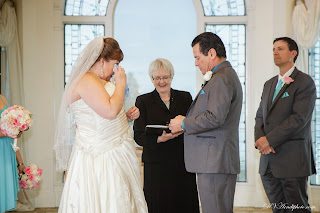 But the surprises for Brooke weren't over yet!  As we came to the ring exchange, I asked the ring bearer for the box holding their rings -- and as I opened it, I "noticed" that their rings were plastic!  Hmmm..... 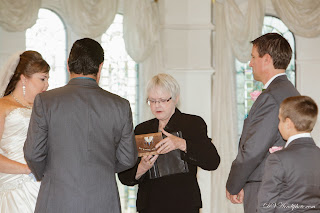 There was a moment of confusion on everyone's faces -- how could this have happened?!  And then -- ta-da-da-da!  The trumpets sounded, the back door opened, and in walked Major Domo! 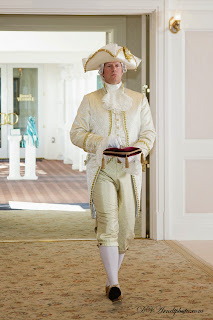 It took Brooke a moment to realize what was happening -- but when she did, she alternated between laughter and tears, and all of the guests were as surprised as she was! 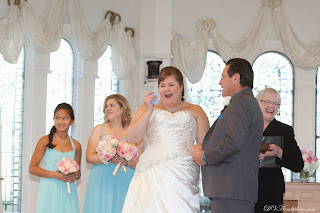 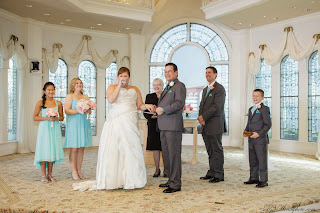 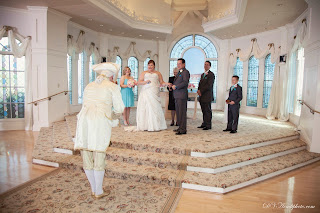 Brooke and Frank also included a glass crystal blending ceremony, where they combined beautiful glass crystals into a center vase, symbolizing the blending of their lives.  The crystals were to be made into a beautiful glass bowl when they returned home, and wording was added to their ceremony to remind them to take care of the bowl, because, like marriage, it should be treated with great care so that it did not become broken or chipped. 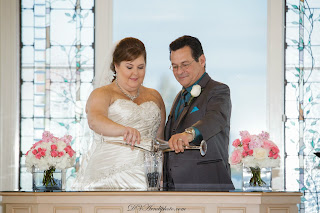 Their ceremony ended with a heartfelt kiss, and as they walked back down the aisle, I do believe they were floating in air!  What true ceremony magic! 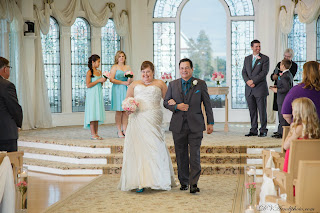 And as for my delight in helping pull off not one, but two, amazing surprises that made for an unforgettable wedding ceremony -- well, this photo says it all! 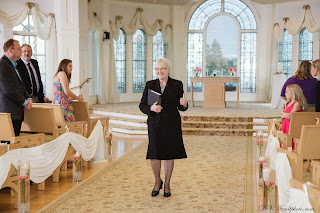 I want to give a HUGE shout out to David & Vicki Arndt of Arndt Photography for their AMAZING wedding photography, and for sharing these photos with me so that I could share them with you -- they caught all of the most important moments so perfectly!  They're the best! 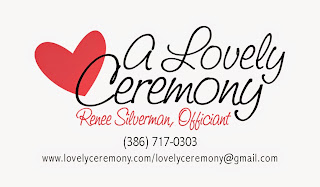