What a great week it's been!  I officiated at two different weddings with similar, but different, stories -- where each couple had been together when they were young, moved on to separate lives, but met again after years apart, and rekindled their romances.

Christina and Ryan became friends in 8th grade.  After high school graduation, each went on to their own lives.  Christina married and had two children, and Ryan became a career Navy man.  Fast forward 12 years, and Christina was single once again.  She and Ryan re-established their friendship, but this time it blossomed into love.  Ryan had never married, and confessed to Christina that he had loved her since 8th grade -- and that he was never able to find someone else who could hold a candle to her!

This past Thursday morning at Gemini Springs Park in DeBary, by the St. Johns River, with the sound of herons calling to each other, a family of bunnies nearby, and surrounded by their families, Ryan and Christina became husband and wife.   Ryan began to cry happy tears as their ceremony started, and was still crying when their ceremony ended.

This morning, I officiated another wedding with a wonderful story.  Todd and Stacy had married each other right after high school graduation, back in 1978.  After five years, they divorced.  Each moved on with their lives and married other people.  Ten years ago, both single, they met again, and their sparks rekindled!  The theme I used for their ceremony was "Love is Lovelier the Second Time Around."  Todd cried happy tears from beginning to end, and Stacy's tears as she said her vows was so moving.
Two different weddings, two very different men -- but both of them weren't afraid to let their emotions show, and cried tears of joy.  Real Men DO cry -- and it's a beautiful thing! 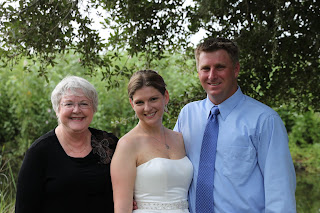 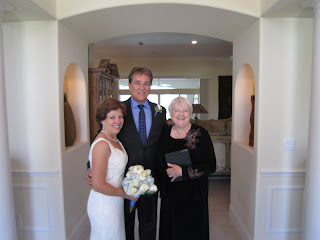 I know I've said it before, but I'll keep saying it, because I truly mean it -- I LOVE what I do!  What an honor and privilege to be a part of a couple's happiest moments!
Congratulations, Christina & Ryan, and Congratulations, Todd & Stacy -- may the joy you felt on your wedding day continue for the rest of your lives together!
Posted by Unknown at 2:49 PM No comments: