October's arrived in Florida, which usually means cooler temperatures and less rain -- however, this year that hasn't been the case!  It's been hot and humid, with rain showers almost every afternoon.  I think that anyone associated with weddings will tell you that they're looking forward to a change in the weather sooner rather than later!

October is also one of the busiest months of the year for Florida weddings, and this month is no exception!  Over the weekend, I officiated at two wonderful weddings -- both outdoors, both very different, and both wonderful in their own ways!

Tuesday and Jordan's wedding on Flagler Beach was small and sweet, and very laid-back -- they rented a beach house and brought down just a few family members and friends.  Although it was warm and muggy, a nice ocean breeze made things a little easier.  They chose a ceremony that was a bit on the longer side, and during it, they smiled and whispered to each other -- it was truly warm and wonderful!

Tuesday's bouqet, and their Sand Ceremony colors, reflected the Fall Season -- so pretty! 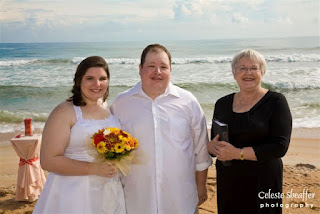 The second wedding of the weekend, Carmen and Aaron's, had a completely different vibe -- they had about 50 guests, and the atmosphere was ﻿casual and festive!  Aaron brews beer for a hobby, and had crafted two special brews especially for the wedding!  He remodeled a refrigerator to hold two brewing kegs and their plumbing, drilled holes in the door, and put two taps in to dispense the beer.  I had a little of the "St. Rogge's Saison," and it was darn tasty! 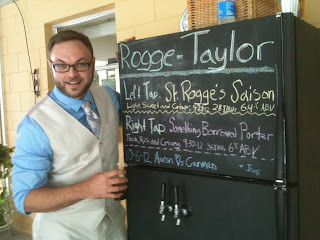 Carmen runs a craft site, and her creative side showed in the amazing table setups under the reception tent! 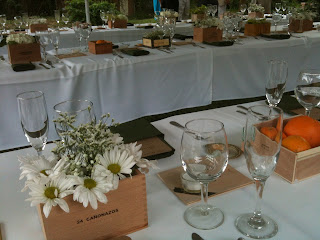 ﻿
At the last minute, they decided to write their vows to each other rather than using the ones they had chosen originally -- Aaron read a "list" of promises that had everyone laughing out loud, and Carmen's heartfelt vows had everyone smiling!

And the best part, of course?  Being pronounced husband and wife -- and sharing a joyful kiss! 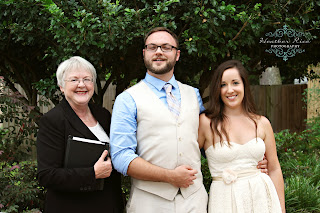 Two ceremonies, each very different -- that's why I LOVE what I do -- thank you, Tuesday & Jordan, and Carmen & Aaron, for choosing me to be a part of your celebration!