Boy, oh boy, have I been neglecting posting on my blog!  Between the busy December wedding season and the January "newly engaged inquiry" season, things have been super-busy, and I'm so thankful for that!  So -- sorry for the delay in posting -- but it's been due to so many wonderful things happening!

Let me start by saying that late December brought two of the most creative wedding ceremonies I've ever performed, both of them in the Walt Disney World areas.  The first wedding took place in Disney's crown jewel venue, The Wedding Pavilion.  Stephanie and Mike wanted a ceremony that included their Marine careers, some Wiccan Elements (they had her mother read a "Blessing of the Directions," which was beautiful), and a touch, of course, of Disney magic.  I'm happy to say, all of these elements were included in their ceremony -- and along with Harpist Christine MacPhail's magical music, their ceremony was truly unique!

The big surprise was Stephanie's wedding dress, which was absolutely breathtaking -- here's a photo, because words just wouldn't do it justice! 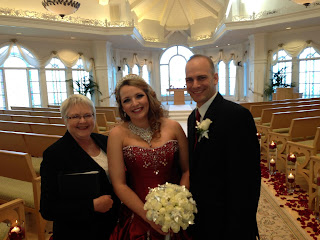 The color, bling, and detailing on her dress was so amazing!
Colleen & Chris' wedding at the end of December, at Disney's Swan Hotel, was truly one of the most creative ceremonies I've ever had the honor of performing!  When Colleen first contacted me from Massachusetts long before their wedding date, she told me that they were huge Buzz Lightyear fans -- and that Chris had proposed to her with a Buzz Lightyear cupcake, with Buzz's finger holding the ring -- see the picture! 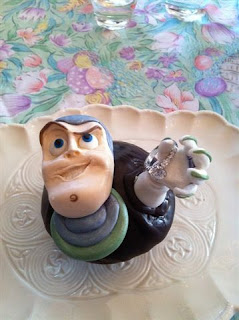 What was very important to Chris and Colleen was not only a one-of-a-kind ceremony, but the inclusion of their family and friends in their ceremony, most of whom had traveled from Massachusetts to be there.
Working on their ceremony was such a fun and creative process -- and they not only promised to love each other "To Infinity and Beyond," but I also asked their guests to stand and offer their support "To Infinity and Beyond!"
The day of their ceremony was a very chilly and breezy one, but the warmth of Chris, Colleen, and all of their guests made for a very warm ceremony, indeed! 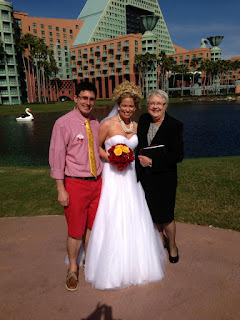 Now it's January, and "Engagement Season" is in full bloom -- I'm getting lots of calls and bookings for weddings in 2013 -- so, although it's late, I'm wishing you all a Healthy, Happy New Year -- stay tuned for more posts about wonderfully unique weddings!
﻿
﻿
﻿
﻿
﻿
Posted by Unknown at 4:50 PM 1 comment: